After my old phone broke, I decided to buy a Google Pixel 3a (Google sells them for $649, but I got mine second-hand from eBay for $340).

After waiting 16 days for postage (Australia Post was under so much strain that parcels destined for Victoria were being rerouted via NSW) unable to make or receive phone calls/texts, it finally arrived! I removed the SIM card out of my old broken phone, but to my horror the old SIM was too large to fit in my new phone’s SIM tray. The issue was that my old phone used a “micro” SIM, whereas my new Pixel 3a needed a “nano” SIM.

I turned to Telstra’s support wiki:

There are a whole range of reasons why you might need a new SIM card, it could be because you got a new phone which needs a new size, or even as a part of troubleshooting if an issue arises, but don't worry the process pretty simple. The quickest way is to visit your local Telstra Store or dealer and request a SIM Replacement. It is free, and your local store assistant should be able to get the order sorted for you in a matter of minutes.

For anyone reading this in the future, 2020 was not the year for a casual visit to your local Telstra Store (or anywhere for that matter), particularly if you lived in Melbourne.

If you are unable to get to a Telstra Store or you live in an area without one, no problems, you can also get a SIM Replacement sent out via the mail by calling 132200 and say “SIM Replacement” and our team will send you a replacement sim card by mail.

As I mentioned earlier, 2020 was also not a good year for speedy deliveries. Fortunately there was one last option…

Is there anything else I need to know?
You should not cut a SIM card down in size, if you do so and it causes damage to your device it may cause your device warranty to be voided. It may also cause the sim card itself to fail.

That sounds like a good idea! I used this template to cut the SIM to roughly the right size with a pair of scissors, then continued to shave it down with a nail file until it fitted in the tray.

I’m glad to report that it worked!

Another alternative would have been to use an eSIM profile (in which the information needed to connect to the mobile network is downloaded digitally to an embedded SIM in the device, rather than sent as a physical SIM card). According to Google support “if you have a Pixel 3a or later Pixel phone, you can use two SIMs: one physical SIM card and one eSIM”. However, a Telstra support representative claimed that only Pixel 4 and later were eSIM compatible: 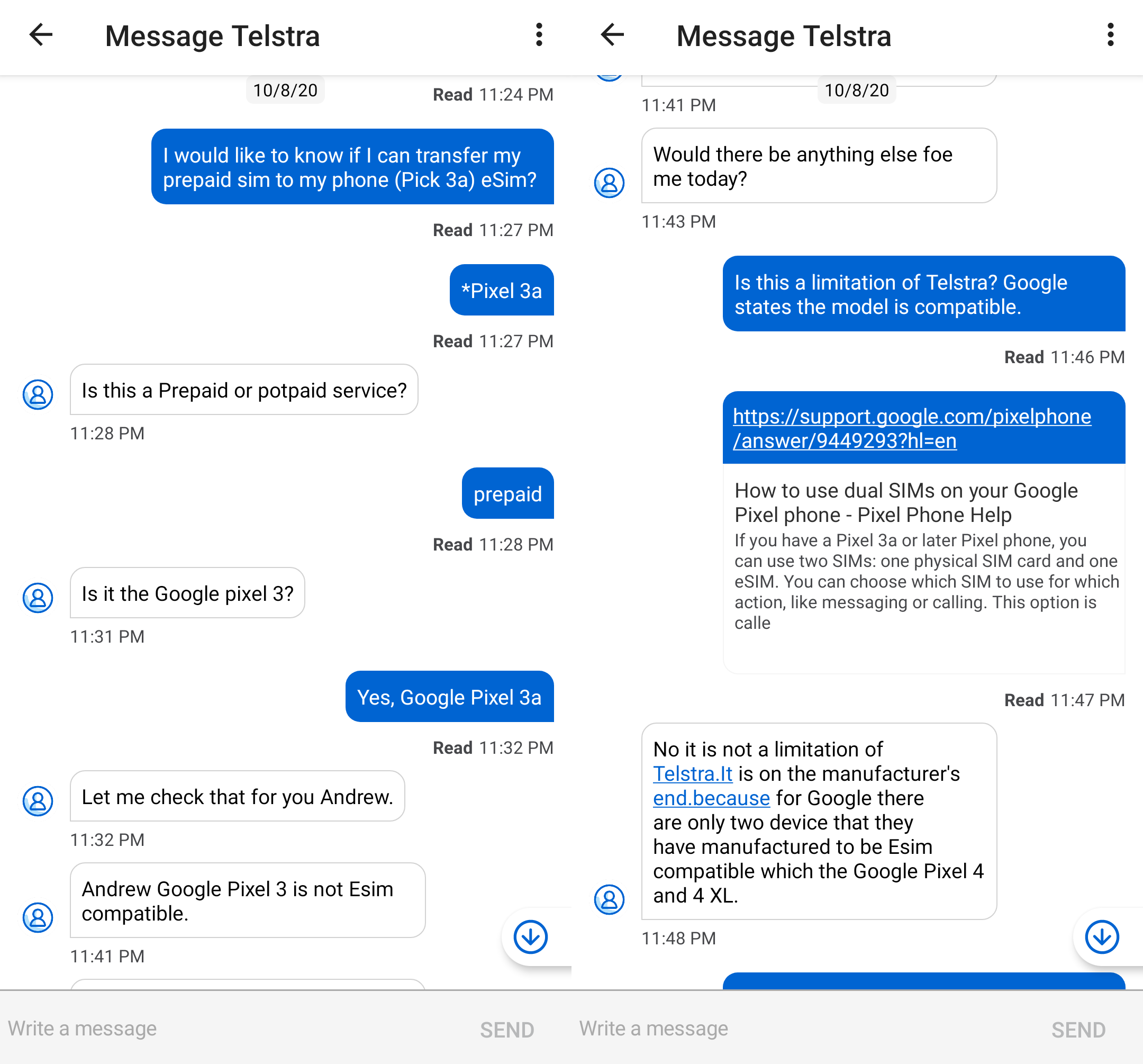 Screenshots of copyrighted content are taken under Fair Use for purposes of criticism and research. Follow at your own risk.